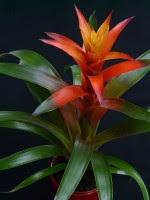 I am always surprised by our interactions with plants and animals.

When Jill and I moved to NC, all of our plants had to stay in Austin except Bernice, our huge bromeliad, whom we brought with us in the form of just one of her cups in a little plastic bag. (Yes her name is Bernice; you have to name your plants. :) )

Bernice is now huge again, and she lives in a pot in our sunroom with a bunch of other plants. It’s been my wife’s practice for some time now to water them all on Sundays and mist them in between. Her practice for watering Bernice has been to put her in the sink and spray her so that all the cups are filled with water just as they would be if she were out in the rain.

Well, as some of you know, my father-in-law had an accident some time back and Jill stayed with her mother until her father could come home. That meant that watering the plants became my job; no problem because I’ve been a plant person for many years. My method for watering Bernice was different from my wife’s. Because Bernice is so big, when you put her in the sink, her cups are everywhere: in the dish drain, on the counter, hanging out over the floor. Plus, when you bring her back from the sink, you have to be careful of water dripping on the floor. So I just watered her in the sunroom and because I know that all her cups need water in them, I used a measuring cup with a spout and put water in each cup as well as the pot itself. Mission accomplished, no muss, no fuss, plant’s needs taken care of. At least, that’s the way I did it at first!

One weekend my wife actually got to spend the weekend at home (!!!) and on Sunday she watered the plants, including putting Bernice in the sink and spraying her. Later we were talking about something and she said, “Oh, by the way, do you put Bernice in the sink when you water her?” I said No, and I told her how I do it. She said, “Oh my god, she told me you were doing that!!!” I said something along the lines of, “Huh?” She said, “Yes, she said you weren’t putting her in the sink! She misses it; she says it’s like being out in the rain!”

Busted, I said, “(sigh) O…kay.” So, the following Sunday, I carried Bernice to the sink and gave her a good spraying. She smiled. Bernice the Tattle-tale Bromeliad.
Posted by John Little Psychic Consultant at 8:59 PM