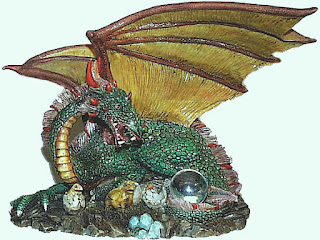 The way we did psychic fairs in , each reader had a “front” table, about 6 feet long, where we’d place brochures, flyers, or whatever, and then we did the readings at a smaller table behind the front table. People who were visiting the fair would walk around and look at the stuff on the front tables to decide which readers they wanted to see.

Usually there would also be flowers or some sort of decorative something-or-other on the front table, and at one fair I decided to put a dragon statue on my front table. This was a very relaxed-looking dragon, lying in a circle with its tail at its head, kind of like a big old dog lying in front of a fireplace, and I put a quartz crystal in the circle that the dragon made with its body. It didn’t mean anything at all, it was just décor.

During the course of the fair, this one particular fellow was strolling around looking at the readers, and he stopped at my table and looked at my dragon. He smiled and said, “He doesn’t look very fierce.” I replied, as deadpan as I could, “He may not look fierce, but if I were you I wouldn’t touch that crystal, ‘cause he WILL take your finger off.”

I naturally assumed he would know I was kidding. But when I said that he got this dazed look on his face, his eyes kind of glazed over and, without saying a single word, he just turned and walked off! I don’t have any idea what was going on in his head, but he did NOT touch that crystal! J
Posted by John Little Psychic Consultant at 2:52 PM